The Tipping Point for Renewable Energy

A new estimate from the McKinsey Global Institute is predicting that renewables (mostly solar and wind) will contribute over 35% of global energy production by 2035.

The “tipping point” that we are referring to is the point at which the percent of solar+wind power generation will exceed coal+gas. Based on current projections, this tipping point will come about in 2035. This date will be significant as it will be prove to the public that renewable energy is mainstream, and will be what powers our society in the future. 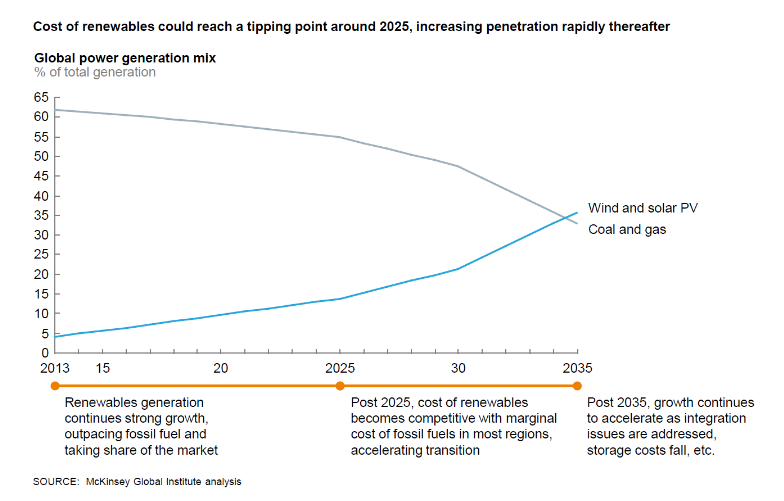 The Tipping Point of Renewable Energy

Here are some key facts that show just how quickly the renewable energy industry is moving towards the tipping point.

The growth in renewable energy over the last five years was driven largely by government incentives. However, we are at the point where unincentivized solar and wind can compete with fossil fuels in various parts of the United States.

Under the Obama administration, there was a clear shift away from Coal towards natural gas and renewable energy. We feel that the trend for renewables will continue growing under the Trump administration as well despite reduced government support – since renewables are now less heavily dependent on incentive programs. 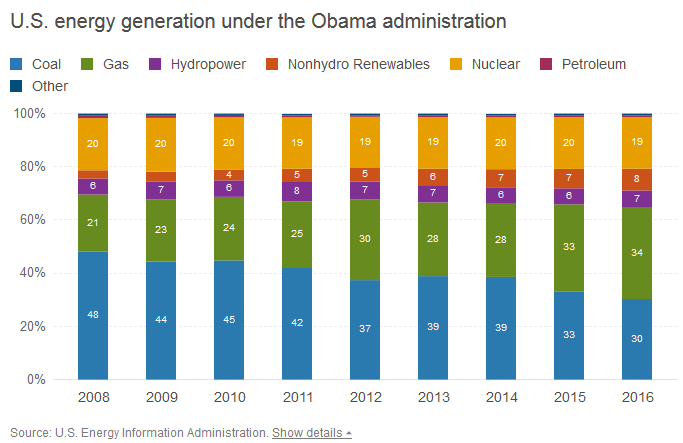 With the shift towards more and more renewable energy, one of the main challenges will be storing this power – since the sun won’t always be shining and the wind won’t always be blowing. In our opinion, battery storage is the most promising method. Other techniques such as molten salt and cold energy storage have some potential, but we do not foresee these technologies getting used on national scale.

The McKinsey report can be found here.